Lee Spievak, who lost part of his finger, would never have thought he would be the center of a medical miracle and in the media seen as “man regrows finger.” Working behind the counter of a model aeroplane shop, Mr Spievak put his finger into the rotating propeller of the model aeroplane, when he was not looking, resulting of the tip of his finger down to some of the bone sliced off.

The part lost was the top of the finger down to the nail bed. Some of the nail bed was still there and this is one of the reasons he was able to regrow his finger back as I write about on nail stem cell research.

Like most patients the doctors told him he had lost it for good. However, he had an ace up his sleeve. Lee’s brother worked in the field of regenerative medicine and was researching on a powder that he had extracted from pigs bladder.

When Lee told his brother Alan about what happened, his brother sent him an extract of this powder with instructions of how to use it. The result was Lee’s finger tip growing back in a few weeks.

How is that possible? Well this ‘Pixie Dust’ as Lee calls it is a substance known by Scientists as Extracellular Matrix (ECM) and it seems to be the glue that binds everything together in the body at a cellular level.

Pigs Bladder is highly abundant with ECM so it is easier for the scientists to extract this and use it in medical applications. The bladder of pigs is cleaned and processed so that the DNA of the pig is removed and only the ECM is left which can then be converted into a product in powder form, a scaffolding or as a glue substance that can be injected into the body.

For around 10 days, Lee’s brother instructed him to put a small amount of the powder on the open wound of his finger, making sure it was clean before hand and then cover up the wound. He would do this procedure for each day until his finger tip regenerated.

It took about for weeks for his finger to regrow and for the wound to close. In about 3 months his finger has completely regrown with bone, flesh and nail along with the finger print and feeling.

This powder or extra cellular matrix is produced and research in the lab at the University of Pittsburgh School of Medicine, along with other institutes around the world. 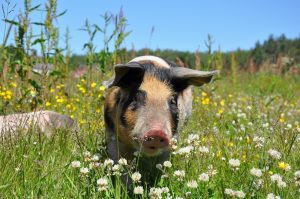 The research is being lead by Dr Stephen Badylak, one of the visionaries in regenerative medicine and they have done a lot of work for the US Military for injured troops coming back home from wars overseas.

Dr. Badylak is a Professor in the Department of Surgery and is the deputy director of the McGowan Institute for Regenerative Medicine (MIRM). He is also the director for the Center for Pre-Clinical Tissue Engineering inside the Institute.

I am aware of two areas that they have been focusing on. Firstly digit extension, where they have been attempting to stimulate partial regrowth in fingers that have been lost below the nail.

In order to improve the quality of the patient’s life, if they can stimulate just a small amount of regeneration in the fingers, then this can make all the difference for the patient in being able to hold a cup of coffee with both hands. The ECM powder cannot regenerate a whole finger that has been lost, at least not yet. This only seems to work when part of the nail bed is intact on the finger tip.

Based on some documentaries on treating military patients, during an operation the surgeon will open up the stump of the amputated fingers and place this experimental powder on the open flesh and bone. They will then stitch the wound back up and then study if any of the bone has grown slightly.

The other area is the treatment of burns where instead of skin grafting, a novel skin spray gun has been developed that contains the patients skin stem cells, that are sprayed on to the area that is being treated for burns. I will be writing a separate article about this as the results are truly impressive based on what I have seen.

The following presentation by Dr. Stephen Badlyak, is a truly fascinating talk about his research including limb regeneration and tissue engineering. He also discusses some of the challenges with the transition of the conventional standard of care and applying new tissue engineering treatments to the patient.

How Does Extracellular Matrix Treatment Work?

Scientists feel that when the extracellular matrix powder is put on to the open wound of the lost finger tip, it instructs the body to attract the stem cells which then proceed to regenerate instead of forming a scar.

I have seen applications where ECM has been used for making a scaffolding of part of a wind pipe, and other parts of the body. The process works by stitching the scaffold on to the area inside the body being treated to replace what is missing. The stem cells are attracted to the ECM scaffold and eventually the scaffold dissolves, resulting in the new missing tissue being generated.

In the video above, Dr Badylak was discussing some of the trials they have been doing on those whom had cancer of the oesophagus with amazing success.

When the oesophagus is removed the quality and mortality rate of the patient is dropped considerably. However what they have done is using the ECM scaffold that regenerates the oesophagus. Basically, they place the extracellular matrix scaffold into the area where the portion of oesophagus has been removed. The stem cells are instructed to regenerate the cells around the scaffold to regrow the missing part.

Could Limbs Be Regrown?

So if medicine is smart enough to do this could we not regrow a whole limb? In a media report, Dr Badylak says perhaps but its early days, however, they feel the technology has the potential to revolutionise.

In 2008 when a lot of this was made public in the media, he points out that perhaps in 10 years, new strategies will be developed that regenerate the bones and promote the growth of functional tissue around those bones. That would be a major step towards limb regeneration using this kind of technology.

It is this kind of talk that gets the military interested and they have been working with injured soldiers in an attempt to regrow part of the fingers as mentioned above. I believe this is all connected into a larger project with DARPA (Defence Advance Research Projects Agency) who back in 2008 setup AFIRM (Armed Forces Institute of Regenerative Medicine). I will be discussing about this soon.

Another project is the case of military soldiers who have had a large section of their leg muscle blown off. In the case of Marine Isaias Hernandez (mentioned in the video) who lost 70% of his right thigh muscle when a mortar exploded in Afghanistan. Under conventional treatment with such severe damage the doctors would have removed his leg as it would not be able to heal correctly.

However, with the result of a 90 million dollar research project, the extracellular matrix in a gel form was injected into this thigh muscle. Along with a course of physiotherapy to build up the strength in the leg, after several weeks the muscle and even skeletal tissue started to regenerate and he has regained full use of his leg. He is even well enough to return back to service although not in combat.

Note a lot of what I have discussed here was based on research that was made public in the media back in 2008 so much will have progressed since then. Dr. Badylak’s talk above was given in 2011.

I will be doing follow up articles based on their latest findings. Much of their research with the treatment of burns in trials has proven successful and has now started to filter into the civilian population.